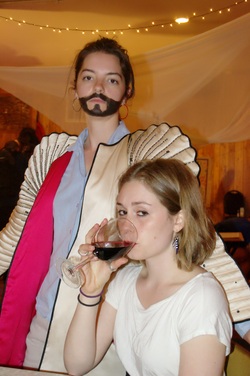 
Underneath the anger there is vital thrusting.  The vital thrusting is a mixture: 60% sorrow, 25% lust for life and 15% sex drive.  We are describing a pie chart with 3 dimensional layers and blended ingredients, or are we talking about an actual pie? Our pie is called “For the Love of Life.” For your enjoyment.

Magda and Chelsea began collaborating in 2012, while studying at the Headlong Performance Institute in Philadelphia.  Their first piece together: “Rooster&Snowball” went on to be presented through Jumpstart LiveArts and DanceNOW at Joe’s Pub.  Their second collaborative duet "Singer/Songwriter" was recently presented by ThirdBird at the Christ Church Neighborhood House.  While continuing to tour excerpts of these pieces, they are also working on an evening-length version to be unveiled sometime this year, so be on the lookout for that.  But that's not all, they are also booked to perform with the Effervescent Collective in March, tour to Upstate New York in May, and squeeze in a showcase appearance in New York City at the Performance Mix Festival in June.